You’re looking at the replacement for the F12 Berlinetta. Gorgeous, right? While in keeping with the recent styling success of Ferrari cars, this one bucks a trend. Unlike the last three updated models from Maranello – the GTC4 Lusso, California T, and 488 GTB – the 812 Superfast doesn’t use turbos. Instead, it continues with a naturally aspirated V12. A bigger, more powerful one.

And of course, this front-engine supercar GT will be super fast. The 812’s twelve-cylinder displaces 6.5 liters, up from the F12’s 6.3. Power stands at a round 800 CV, which translates to 789 horsepower, while torque is up to 530 pound-feet. For reference, the 6.3-liter in the F12 makes 731 hp and 508 lb-ft, while the F12 Tdf‘s massaged version puts out 769 hp and 520 lb-ft; the LaFerrari’s engine made 789 hp, which was boosted further with the addition of an electric motor. So this 6.5-liter is tied for the title of most powerful Ferrari road-car engine, and it makes this the most powerful front-engine Ferrari ever, which is neat. It’s supposed to reach 62 mph in 2.9 seconds and reach a top speed of 211 mph. Yep, super fast.

Max power is again made at a screaming 8,500 rpm and the torque peaks at 7,000. More displacement means more output, but Ferrari also switched to a higher-pressure fuel system and variable-geometry intakes to squeeze even more out of its big V12. The company’s seven-speed dual-clutch transmission gets its own gear ratios to handle the power in this application. 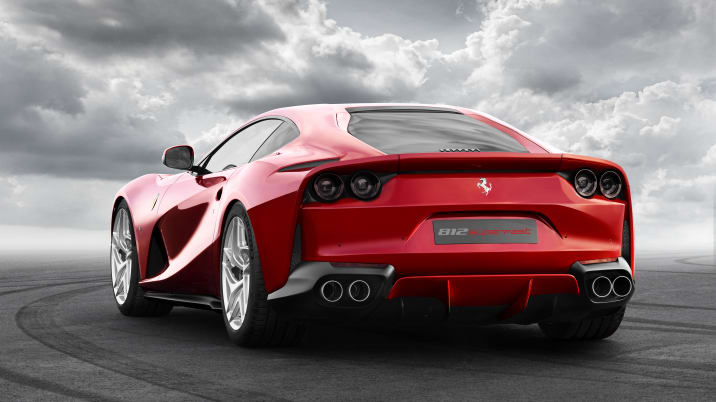 One big change is the car’s switch from hydraulic to electric power steering. It’s the first Ferrari road car to use EPS, and the company assures us just makes things better by working with the other chassis systems, like Side Slip Control. The 812 Superfast also gets the second version of Virtual Short Wheelbase, Ferrari’s name for rear-wheel steeriung.

Ferrari says the updated design is supposed to be reminiscent of the 365 GTB4 from 1969. We say it’s just plain pretty either way. There are active flaps at the front and some kind of new air bypass at the rear to improve downforce, and which sounds a lot like something out of Formula 1. The launch color seen here is the special Rosso Settanta, which is in celebration of the company’s 70th anniversary.

The interior has been updated a bit as well, with a reshaped dash top (featuring one fewer air vent) and new controls on the steering wheel. The optional display in front of the passenger, which can show your co-driver just how fast you’re going, appears to have been updated to a touch screen to give them their own set of controls.

The car makes its debut at this year’s Geneva Motor Show. This year marks the 70th anniversary of the marque. and we expect some sort of celebration at the show.

Best Ferrari Engines Ever Made

Ferrari 812 Competizione and Aperta are sold out