Information is a good thing, but sometimes too much information can be overwhelming. One of those situations might be when trying to wring the most out of a high-horsepower mid-engine supercar like the new McLaren Super Series model, the 720S. W’re guessing here. So at the press of a button, the driver can hide most of the gauge screen and clear some of the view out the windshield.

This Slim Display Mode ought to come in handy when the car’s new Variable Drift Control is put to the test. When drifting, visual cues outside the car are a little more important than what song is playing at the time or your fuel economy. When the large gauge screen is folded down, a smaller display strip shows the gear, tachometer, and speed. Simple enough. 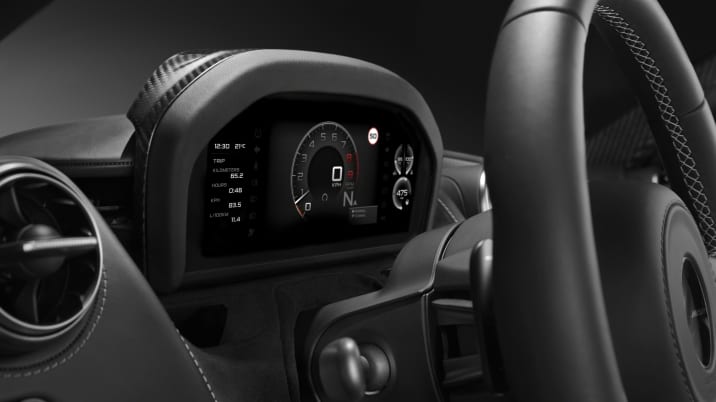 When the big screen is in place, the full trip computer, a round tach, and helpful gauges like fuel and temp show up. This foldy screen (McLaren calls it the Folding Driver Display) is one part of the new McLaren Driver Interface, which also includes a new 8.0-inch center screen with a revised interface to control audio, navigation, and settings. There are some hard buttons as well, although we’re not sure what they control and McLaren didn’t release photos of the touch screen or center stack.

And yes, we’ve already seen the new McLaren 720S thanks to an Instagram leak, but full details on the car won’t be revealed until next week at the Geneva show.

McLaren’s MSO created a 720S in the Gulf Oil livery