Even salesmen with delicious cuts of meat to offer know that you sell the sizzle, not the steak. That’s what Czinger went to Monterey Car Week to do with a third version of its tandem two-seater 21C and its planned Hyper GT. We’ll start with the 21C, which, remember, launched with two body styles. There was a road version and a track version whose aero accoutrements provided three times the downforce of the road car. The 21C V Max takes the road car in the opposite direction of the track car, streamlining and elongating the bodywork to trade drag for velocity.

The package should make more speed from the 2.88-liter twin-turbo V8 that sits behind the cabin in all 21Cs, aided by the two electric motors on the front axle. Founder Kevin Czinger said in Monterey the 1,233-horsepower powerplant enables the same sub-two-second 0-60 time as the other variants. Having reworked everything from the front splitter to the rear diffuser, the Vmax should be even faster than the claimed 27-second sprint from zero to 250 miles per hour and back to zero for the regular 21C. Claimed quarter-mile time is 8.1 seconds, claimed top speed is 253 miles per hour.

The V Max will be part of the 80-unit build of the 21C, giving buyers three flavors to choose from at a cost of $1.7 million per. First deliveries are planned for the end of next year. 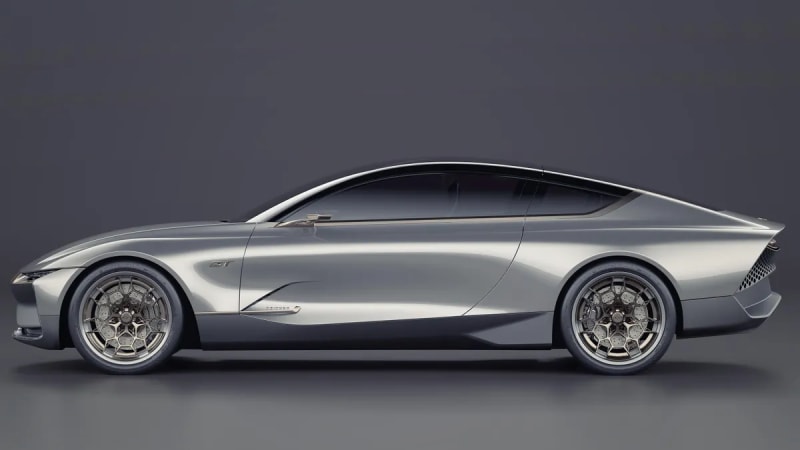 At some point after the 21C begins deliveries, Czinger plans to have its second vehicle headed to production, known for now as the Hyper GT. It’s powered by the same hybrid setup as the 21C but with the ICE put up front and — we assume — the e-motors in back. Czinger says this will be “the most powerful grand tourer ever produced” and “by far, the top performing GT ever built and ever put out on the street” that also happens to have room for four adults and their luggage; those occupants will enter via gullwing doors, because you can’t see the wow factor of 1,233 hp at the valet stand.

Being so far out from production, we’re not sure what the interior will hold. But the company plans to produce 1,000 of the Hyper GT at its Los Angeles headquarters, each costing between $750,000 and $1 million, and then follow it up with a battery-electric model sometime before 2030. Czinger told Autocar, “The original conception of Czinger was to produce that ultimate road-track car [the 21C] that could set all of the records.” After the reception to the 21C and breaking the Laguna Seca lap record, he said, “Then the idea was ‘This could be a really, really cool brand,’ with the father-son combination [referring to his son and co-founder Lukas], that creates a whole series of the most off-the-hook vehicles in each of the categories.”