Last year, at the Paris Auto Show, AMG head Tobias Moers told us about the Project One hypercar. The months since this announcement haven’t tamped down our amazement about what Mercedes-AMG is up to. The renderings you’re looking at are straight from AMG, released right as our man in Europe is heading into a technical briefing on the car. While we wait for his full report, let’s ogle this incredible hardware.

We were told to expect a Formula One-derived powerplant, and by golly that sure looks like one. There’s a carbon fiber air inlet perched atop a V6 hybrid power unit mounted amidships, and flanked by a snake’s nest of headers. The exhaust system sits on top of a structural rear transaxle, an automated manual of course. There’s an electric turbocharger, which is part of a very exotic MGU-H system – it can essentially harvest kinetic energy from exhaust gas spinning the turbocompressor, and also reverse flow to spool up the compressor when needed using stored energy. Speaking of which, there’s a high-voltage Li-Ion battery just behind the front axle. 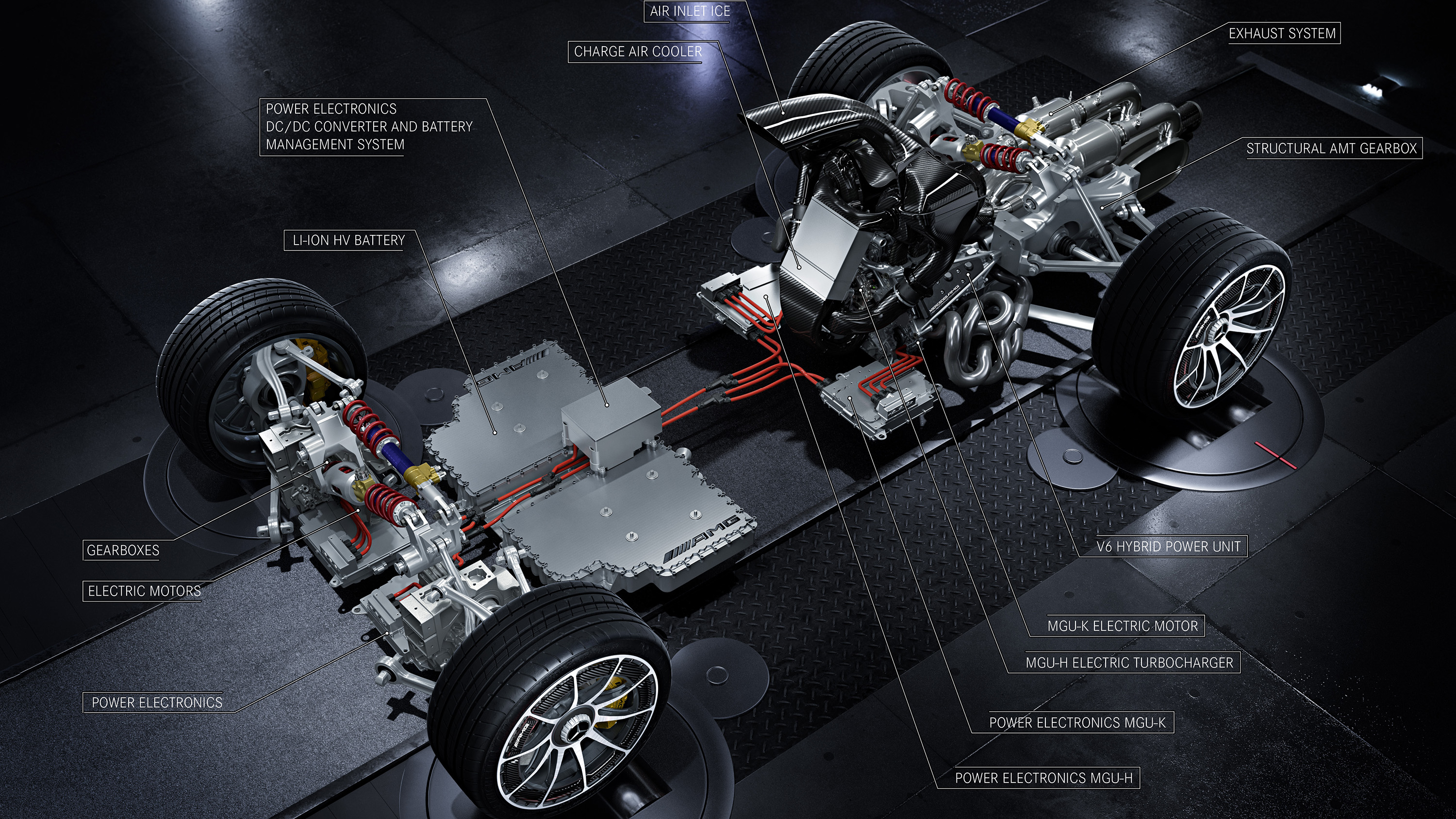 That front axle will be electrified, with no mechanical connection to the V6 engine. So it’ll need juice to run, likely a mixture of MGU-H energy and also power harvested from the MGU-K system, which is basically a conventional hybrid generator physically connected to the engine. Well, conventional in theory; this generator’s likely to be as exotic as the rest of the car. That assessment extends to the inboard suspension, a complex arrangement of pushrods and transverse coilover units, although the rear pairs exotically-mounted shocks with the classic Mercedes-Benz five-link arrangement.

This is not, of course, unadulterated F1 tech. The engine is likely to be less strung out, only revving to around 10,000 RPM than what a real F1 car can spin at, to increase the engine’s lifespan. That being said, Moers is on record as saying that the engine will need a serious overhaul at around 31,000 miles. Assume that this will be extensive and extremely expensive, not that a Project One buyer’s going to have trouble paying for the service. After all, the car’s expected to cost $2 million when it goes on sale.

We’ll have much more detail coming soon, but until then enjoy this intimate look at an upcoming hypercar.