It’s a cliché to say a car has no competition. Icons like Ferrari, Lamborghini, McLaren, and Porsche arrogantly proclaim their products stand alone. For the 2017 Ford GT, that notion is true.

Yes, it’s measured against the exotics. The GT is faster than some. Not as powerful as others. They’re all pretty light. And numbers aside, each one is brilliant in some way. That’s where the GT is different. It’s the only American supercar on the list. Really, the GT is competing with itself. Or worse, the idea of itself.

The people who will own this car remember or were told the legend of the Ford GT40’s indelible 1-2-3 victory at the 1966 Le Mans. They might have owned the 2005-06 GT. These were seminal moments in Ford’s history. The company doesn’t downplay them. In fact, Ford looks back on them as a reminder of its past greatness and future potential. That’s heady stuff. But the mid-engine GT certainly has all of the vitals: 647 horsepower, carbon-fiber materials wherever possible, advanced aerodynamics, and a top speed of 216 miles per hour. 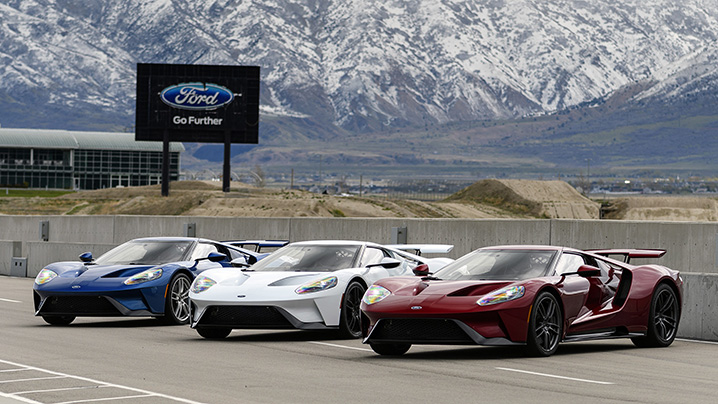 We’re contemplating all of this as we arrive at the Utah Motorsports Campus about 30 miles west of Salt Lake City. It’s a frigid morning and temperatures won’t make it out of the 40s during our day at the track. There’s occasional precipitation, thick puffy cloud cover, and random periods of bright sunshine set against the mountains. It’s surreal, yet that seems fitting since we’re testing a car whose legend precedes it. Today we’ll find out if the Ford GT is legit or merely hype.

Getting in the car isn’t that hard. It’s like any exotic. The doors swing up. We sling a leg over the carbon-fiber tub, slide across, and nestle into the bolstered and ribbed racing-style seats. We’re surprisingly comfortable. The view is decent. We adjust the steering wheel and use a hand pull to set the pedal box. The dashboard is one long carbon-fiber shelf. We notice “H984” (the model-year designation and last three of the VIN) and an American flag at the far right. There’s a 10-inch digital instrument cluster in front of a steering wheel straight out of a racecar. Designers “borrowed” one hanging on the wall in Ford product chief Raj Nair’s office and used it as a guide. There are buttons for the headlights, turn signals, and audio controls, and knobs for the driving modes and windshield wipers. The headliner is soft, and there are carbon-fiber pieces in the doors. All told, the setting is actually nicer than we expected. We’re excited, but not freaked out. On a scale from Camry to Countach, this is somewhere in the middle. 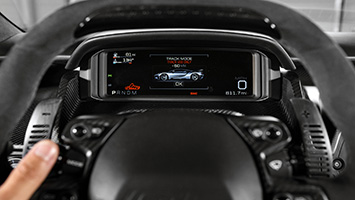 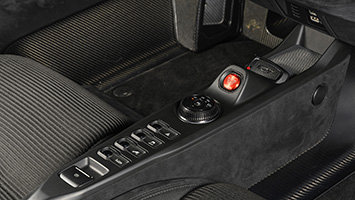 We push the red button. It must be the first time this car has fired today. It sounds like something is exploding behind the cockpit. The 3.5-liter twin-turbo EcoBoost V6 engine growls, burbles, and then evens out to a low, sinister idle. Easing onto the western loop of the circuit, our first laps are cautious. By afternoon, we’re helmeted up and wearing a six-point harness, blasting along the brief open straights at more than 124 mph. Of course, it’s exhilarating. The car has a lot of brakes and there’s little pedal travel. The idea is to carry as much speed as possible through the long curves. Get it a little bit wrong or start feeling cocky and these carbon-ceramic stoppers grab you by the collar. The GT is so low. At one point we’re scraping parts of the track – and it’s a pretty even surface. The steering is heavy, in line with how the McLaren 675 LT feels on a circuit (McLaren now also has the 720S looming as a GT-fighter). At an elevation of more than 4,300 feet, we’re probably not making all 647 ponies, but the quoted sub 3-second sprint to 60 feels right. The seven-speed dual-clutch is excellent. Grabbing the paddles is fun, but not really needed.

At all times, we’re mindful of the car’s competition DNA. The street and racing models were designed at the same time, and features like an FIA-spec roll cage are on the version that’s sold to the public. A little extreme? Not really, the 1,000 people who will pay starting prices of $450,000 will want the track capability or will enjoy being able to brag about it. “Racing is a reflection of our abilities in the company and our technologies,” says Dave Pericak, Ford Performance global director.

The GT sets itself up confidently on the track. We estimate it weighs 3,264 pounds (Ford wouldn’t specify the curb weight, but says it’s ‘racecar dry’ at 3,173 pounds), so it’s predictably nimble. The Michelin Pilot Sport Cup 2 tires have plenty of grip, and the circuit is mostly dry by the time we’re going fast. The hydraulic pushrod suspension has a torsion bar and Multimatic’s active electronic DSSV dampers. Multimatic, the Canadian race team/parts supplier/builder of the GT is rapidly becoming known for its chassis expertise, and DSSV setups are used on such disparate models as the Aston Martin One-77 and Chevrolet Colorado ZR2. 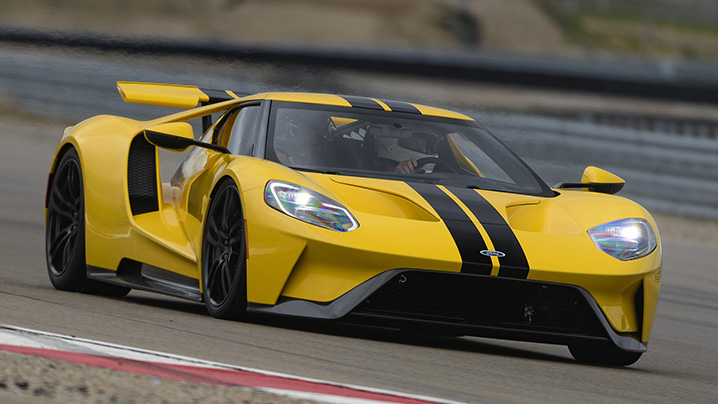 The GT has five driving modes: Wet, Normal, Sport, Track, and the awesomely named V-Max, which is for straight-line speed on a track. They raise or lower the suspension, adjust the damping, calibrate the transmission, and allow stability and traction control to be turned off, depending on the conditions. When moving from Normal to Track, the GT drops nearly two inches and the rear wing shoots up. The first time we dialed up Track while cued up in pit lane, it so startled us, we turned to an Autoblog producer and blurted out: “What the X&$! just happened?” That rear wing changes shape and uses a small Gurney flap when totally deployed to create peak aerodynamic efficiency. There’s also a small underwing and ducts in the front to keep the car balanced.

It’s all built around a carbon-fiber tub, which is integrated with the front and rear suspensions and instrument panel. The bodywork is all carbon fiber, which also let designers experiment in the name of style and performance. The buttresses that go from the roof to the fenders wouldn’t have been feasible with other materials, Ford says. “The use of carbon fiber allowed the design teams to do things that they could never press in steel,” says Chris Svensson, Ford design director. Materials aside, it looks like the most evolved version of the Ford GT. The car from a decade ago was very close to the look of the 1960s racecars, and this new one was conceived to attract a modern generation of enthusiasts. It’s more severe and striking than its predecessors, and at speed on the track it looks like a fighter jet ready for takeoff. When the car is static the details stand out. LED lights front and rear. Dual exhaust pipes centered and mounted just below the rear wing. Carbon-fiber spoked wheels (optional on our test car). It’s formidable, without being overdone. To our eye, the GT is more subtle than the Lamborghini Aventador, but the Ford’s fuselage-like body makes it more stunning than the Ferrari 488 GTB. 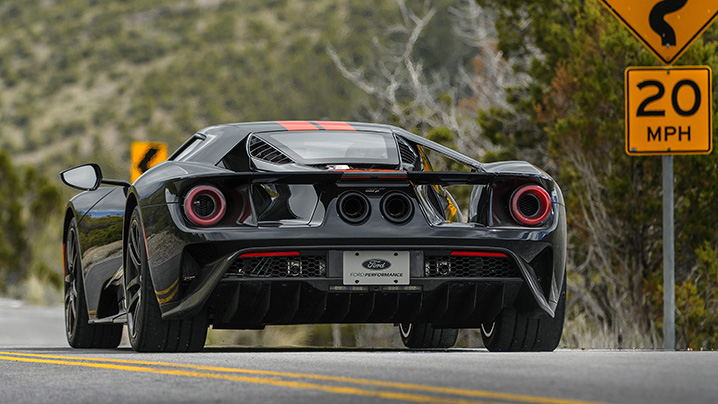 During our street drive through the small towns of Utah and up into the mountains, the GT loses a little bit of its shine. It’s louder and seems to rattle. After a day in these racing seats, we’re a bit stiff. It’s not a road-trip car, though most supercars aren’t. We didn’t measure fuel economy, but the EPA says the 2017 GT actually gets worse gas mileage (11 city/18 highway miles per gallon) than the 2006 GT (12/19), which had a supercharged 550-hp V8. Both GTs eke out 14 combined mpg, and there’s no way the owners of the new model will care. Still, it’s not a great look considering the 2018 Ferrari 488 gets 16 in the city and 22 on the highway.

But that’s just picking nits. After a day with the GT, it’s clear the supercar lives up to its promise. It’s sophisticated, powerful, and a fitting halo for Blue Oval performance. It does things the Mustang can’t do. You might have heard the story that Ford initially considered taking its pony car to Le Mans, but after going over the modifications, the Franken-Stang wasn’t recognizable. With a self-imposed deadline of 2016, 50 years after America’s most important victory in Le Mans, Ford got to work. In a padlocked lair in the basement of Ford’s Dearborn, MI, product development center, the GT came together.

Last year, the GT took the first, third, and fourth places in the GTE class at Le Mans, with only a second-place finish by Ferrari preventing complete historical symmetry. That’s the stuff of legends. The 2017 Ford GT needs to live in reality. And in a world where Ferrari, Lamborghini, McLaren, and yes, the specter of the mid-engine Chevy Corvette all exist, Ford has carved its own competitive perch. Not many will ever drive this new GT, but those who do will likely agree: it’s true to its original promise and fulfills Ford’s potential as a legitimate supercar maker.