All posts in “lamborghini aventador s”

The car you see here is a Lamborghini Aventador S that was crafted by Skyler Grey, a 19-year-old pop artist based in Los Angeles, California. Lamborghini worked with the artist to make this art car, and it has just revealed the car at the Monterey Car Week in California.

Paying homage to some of the best pop artists out there, Grey took the Aventador and added plenty fo bright colors and some bulls along the side, which is, of course, the emblem for Lamborghini. The Lamborghini CEO Stefano Domencali said that the car was already sold before the project even completed.

Inside the car, you’ll find a black interior with orange contrast stitching and an intricate Bull embroidered between the seats. While all Lamborghini Aventador S models are special, this one is a true one-of-a-kind art piece. The project came about through the Ad Personam program, which personalizes customer’s cars.

The car is also part of Lamborghini’s Lamborghini Sicura program. According to Motor Authority, the program certifies cars and works to prevent counterfeits.

Like all Aventador S models, this special art car features a 6.5-liter V12 that produces 730 hp. The car is just as much a performer as any other Lamborghini. It features a 0-60 mph time under three seconds and a top speed of 217. Just because it looks cool and unique doesn’t mean it should be any slower.

Lamborghini confirms next-gen Aventador and Huracan to be PHEVs

It’s official, Lamborghini CEO Stefano Domenicali confirmed to Top Gear magazine that the next-generation Aventador and Huracán will get plug-in hybrid powertrains. Autocar reported last October that the next Huracán would get “next-generation” batteries to aid its naturally aspirated V10 when it debuts around 2022. The fate of the Aventador S’s successor, however, was unclear beyond the certainty of it featuring a mid-mounted V12. Now we know it will get a naturally aspirated V12 with electric help when it arrives in 2020 or so, and both cars will boast a small all-electric range.

Top Gear imagined how much each coupe could gain — both in weight and in power — by mating each car’s current engine with the 134-horsepower electric motor and 14-kWh lithium-ion battery pack from the Porsche Panamera Turbo S e-hybrid. TG figures the Aventador S replacement would go from 730 hp and 508 pound-feet of torque to 860 hp and 566 lb-ft. That’s the good news. The bad news is that Porsche said the hybrid system adds 661 pounds to the weight of the Panamera. Tack that onto the Lamborghini, and an Aventador S goes up a weight class to 4,354 pounds. The new Huracán output stretches from 602 hp and 412 lb-ft to 728 hp and 471 lb-ft, and 3,796 pounds.

Judged on the results of that purely imaginary fancy, Top Gear says the numbers “well and truly stack up.” We think that given the chance to add 130 horsepower at the price of putting a Harley-Davidson Fat Boy in the trunk — or the weight of second complete engine — we might ask if there were other tradeoffs available. We’re certain Lamborghini’s working all the angles, though, and confident the Sant’ Agata carmaker will translate its actual figures into another duo of brutal, bewitching sports cars.

The brand is looking beyond the near-term hybrids to what could come after, as well. Domenicali said he doesn’t believe there will be sufficient potential in electric powertrains until 2026, but he’s ready with concepts like the Terzo Millennio whenever the powertrains are. Lamborghini’s also working with the Massachusetts Institute of Technology to “write an important page in the future of super sports cars for the third millennium,” suspected to center on lightweight materials, solid-state batteries, and alternative fuels. On that last note, Domenicali’s already eyeing the potential of using hydrogen fuel cells in the distant future.

Note the absence of the word “turbocharger” from any discussion of the brand’s future out to the 2030s. Said Chief Technical Officer Maurizio Reggiani, “As long as I’m technical director, our super sports cars will not have a turbocharged engine. It’s about emotion. If you don’t have emotion, then you have nothing.”

April 24, 2018 / Comments Off on Lamborghini confirms next-gen Aventador and Huracan to be PHEVs
0
456

Supercar builders seem to becoming good at making convertibles that make negligible sacrifices. McLaren recently launched the 570S Spyder, which is exactly as fast, stiff and efficient as the coupe with only about 100 pounds of extra weight. Now, Lamborghini has done virtually the same thing with its flagship Aventador S Roadster.

The Aventador S Roadster features the same naturally aspirated V12 as its hard-headed twin, and it makes the same 729 horsepower and 509 pound-feet of torque. That engine will take the roadster to the same 217 mph top speed as the Aventador S coupe. The only sacrifices appear to be that the roadster weighs 110 pounds more than the coupe, and it has a claimed 0-62 mph time a tenth of a second slower. But we’re not sure you’ll care about that tenth of a second with the wind in your hair and the V12’s exhaust note in your ears. And if you ever get tired of the exposure to the elements, you’ll always have the top with you, since the top panels, weighing roughly 13 pounds a piece, can be stowed in the front trunk.

Actually, there is one extra sacrifice to choosing the convertible, and that would be the price. The Aventador S Roadster has a starting MSRP of $460,247. That’s roughly $40,000 more than the coupe. That could get you a well-optioned and customized Aventador S coupe, but no amount of custom interior configurations can get you the full auditory experience the Roadster can.

It’s just past dawn and I’m running on a thin supply of caffeine and adrenaline, but the 2017 Lamborghini Aventador S I’m chasing around Circuit Ricardo Tormo just made me crack a grin: faint blue flames are simmering deep within the leader’s three exhaust pipes, pulsing almost imperceptibly as it whips around the track.

Few things about the Lamborghini Aventador LP700-4 (including its alphanumeric name) were subtle, but the boys in Sant’Agata Bolognese have gone full-bore at refining the famously unwieldy flagship enough to make it drive as capably as it looks. This updated version has been rechristened with an S at the end of its name, and yes, in the twisted microcosm of earthbound fighter jets, flames coming out of hindquarters qualify as subtle. Of course the Aventador S produces more power – to the tune of 729 horsepower, a 38-hp climb from before, with torque only increasing by one, to 509 pound-feet – and the extra grunt affects neither its 0-to-62-mph time of 2.9 seconds nor its terminal velocity of 217 mph. But version 2.0’s most notable improvements apply to the big Lamborghini’s chassis, which now uses a four-wheel-steering system to countersteer the rear wheels below around 75 mph, and turn them in phase with the fronts for stability at higher speeds. The system responds in 5 milliseconds, and has the virtual effect of shortening the wheelbase by up to 20 inches or lengthening it by 27 inches. In case you’re keeping tabs, the extra 13 pounds of the steering hardware are offset by a new titanium exhaust system, essentially rendering the curb weight unchanged. 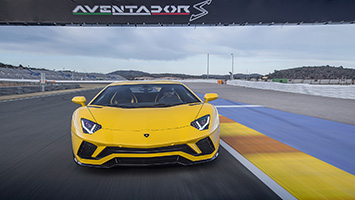 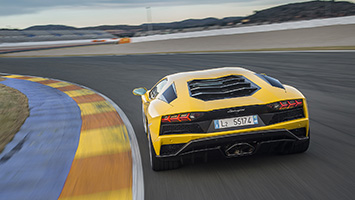 If you’ve ever tried to toss a boomerang through a maze, you’ve got a basic idea of what it took to carry an original Aventador through a high-speed corner. The act required some patience to allow the front wheels to dig in and take hold, and even more resolve to wait for the perfect moment to squeeze the right pedal and power out of the apex. Accelerate too early, and you’d suffer terminal understeer until you allowed the weight to shift, likely triggering traction control as you goosed the throttle on the way out. At the Spanish track, the new Aventador manages something the first one couldn’t: though it still retains some understeer, it also dances and turns more willingly, snaking its way through each corner with a gratifying combination of weight transfer and grip. Oh happy, fire-breathing day.

There’s more than four-wheel steering at play helping the Aventador S grapple with the corners. On top of revised suspension kinematics and geometry as well as new upper and lower arms and wheel carriers, the pushrod suspension now uses adaptive magnetorheological shocks like those on the Aventador SV. The stability control and Haldex all-wheel-drive systems have been revised so power doesn’t dump to the front wheels during off-throttle maneuvers, making it easier to steer the beast with the right pedal and power out of corners. Revised aerodynamics boost downforce and decrease drag, depending on the three-setting spoiler’s position. The new EGO system offers customizable drive modes, separating steering, suspension, and drivetrain settings for a total of 24 combinations. Last, and certainly not least, the notoriously herky-jerky seven-speed automated manual gearbox has been re-tuned for (slightly) more smoothness. 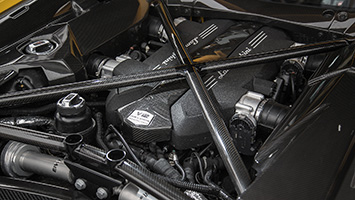 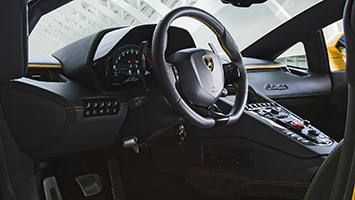 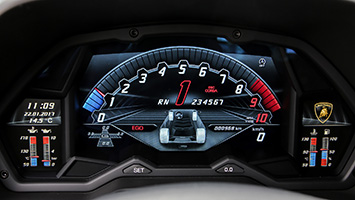 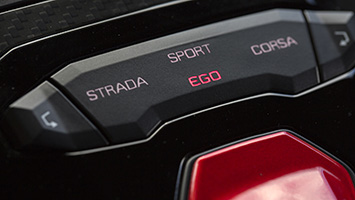 To highlight the improvements, Lamborghini provided a back-to-back slalom drive between an Aventador LP700-4 and the new S model. The sum of the changes are dramatic: where the old model feels bulky and reluctant to turn, the new one seems hinged at the middle, negotiating surefootedly through the tight course of pylons. The Aventador S feels smaller, nimbler, and livelier, its four-wheel-steer system responding imperceptibly to driver inputs.

After the slalom exercise, I return to the 2.5-mile circuit determined to push the supercar harder. Though new rainfall begs for caution, the screaming V12 tickles the devil on my shoulder and against the advice of event organizers (kids, don’t try this at home), I switch off the electronic aids. As expected, with my right foot acting as traction control, the combination of a relatively light flywheel effect, low surface friction, and obscene power makes the Aventador S’s tail snap out of line dramatically when instigated. But unlike the LP700-4, the S feels more composed as it drifts at speed, responding to stabs of the throttle and brake with the appropriate weight transfer and yaw rotation. It may not deliver the ultimate precision or control, but it’s a palpable improvement over the previous car. 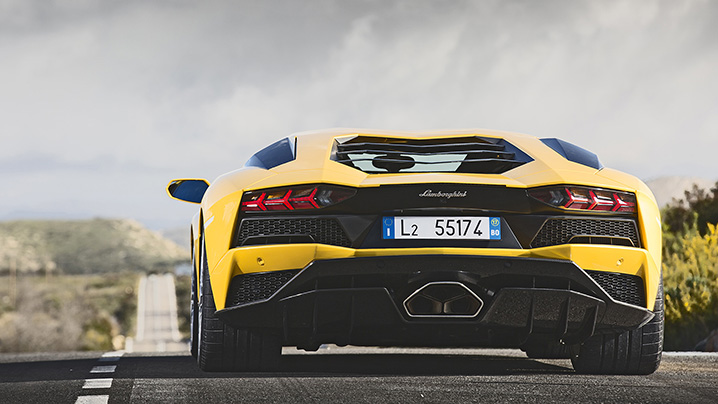 When track time ends without incident, it’s time to drive home on public roads and highways, an act of automotive shock and awe that leaves a trail of incredulity and wonder with the locals. To see an Aventador rumble down Rodeo Drive is one thing, but entirely another when it’s passing through a modest European country that’s unaccustomed to exotics that cost more than a suburban home. Though we don’t come close to exploiting the car’s limits through mountain passes, the Lambo feels more composed and better connected with the tarmac that passes beneath it. The transmission still pauses and lurches, but less abruptly. Engineering changes aside, the Aventador’s human factor is, as before, absolutely off the charts: the low-slung Italian wedge has a way of making women stare, men cheer, and children break out into visible hysterics. It’s the stuff of classic Lamborghini, packing the sort of visual wallop that inspires teens to hang posters on their walls and middle-aged men to deplete their IRAs.

For all of its mechanical excesses, the Lamborghini Aventador S still doesn’t make a whole lot of sense to level-headed high-end car shoppers. If you want a more logical Lambo that happens to be a better driver’s car, consider the Huracán: it’s lighter, more tossable, and considerably better behaved thanks to its seamless dual-clutch and revvy V10. Or better yet, hold out for the Huracán Performante, which should be even swifter than the current (sold out) king of the hill, the Aventador SV.

But, if nothing less than the most dramatic, in-your-face snorting bull will do, there is no replacement for the almighty Aventador S, an unapologetic flagship that easily makes other supercars look commonplace. Though not without its quirks, Lamborghini’s top dog proudly remains the last naturally aspirated, carbon-bodied, mid-engine V12 car in serial production. That automotive peerlessness not only makes it easy to forgive its clear and present flaws, it makes the $421,350 MSRP seem well worth every penny.