Audi is planning to create three ‘sphere’ concept cars as an indication of how they see the future of automobiles, the first one we could admire during Monterey Car Week, called the Skysphere, was a luxury GT Roadster that could effectively ‘stretch’ her wheelbase to offer more interior space, the second one in the sphere series is the grandsphere concept unveiled at the IAA, the International Motor Show in Germany, usually held in Frankfurt, but for the 2021 edition moved to Munich.

All of the Audi ‘sphere’ concepts will come with level 4 automatic driving, we’ve seen that on the skysphere already, where the car would really transport the occupants from point A to point B without them even touching the steering wheel, as that part of the interior isn’t needed anymore in this mode, it actually folds away, out of view. And that’s exactly what we are seeing inside this larger grandsphere concept too, and it will make its return in the third car in the series, the urbansphere which we’ll be able to admire in 2022.

Audi and CARIAD, the Volkswagen Group’s global software think tank, are working together to create new technology, and their Level 4 is nothing less than changing the interior concept of a car as we know it today, still being a driver-oriented cockpit with seats for three or four passengers, but once the auto-driving mode is engaged, both the steering wheel and the pedals are moved out of sight to create a serene environment for all occupants.

Audi calls these concepts ‘spheres’ because all three are designed from the idea of the interior being the most important part of the car of the future, the occupants’ living and experience sphere while traveling, in case of this grandsphere, Audi calls it a private jet for the road, with an overall length of 5.35 m (17.6 ft.) with a 3.19 m (10.5 ft.) wheelbase that’s even longer than the current Audi A8 Long, the grandsphere is all about luxury and comfort once you open the ‘suicide doors’ found on this concept, the front doors are hinged from the front, but the rear doors open from the rear to allow much easier access into the luxurious interior as there is no B-pillar on this model.

The Audi grandsphere will also come with a pathway identification … this means the car will recognize who is approaching the vehicle, and will automatically open the doors to welcome them, but it goes way further than that, depending on who the car senses, the ambient light changes, climate control settings are restored and the seats move into their predetermined position … even the infotainment system picks up on where a passenger stopped streaming a video before getting into the car, only to resume that video on one of the displays found inside the grandsphere.

A feeling of openness and breadth is created, helped by the absence of the steering wheel and pedals, but also because of the large window surfaces on the Audi grandsphere, even the entire roof is transparent on this concept, even the side windows use a futuristic concept where the upper half gets a very distinctive angle while the widest part of the side window is just above eye level.

Because the Audi grandsphere is all about comfort and luxury, the front seats are considered first-class seating now, especially as the car will drive itself, the passengers have an amazing view over the completely clean dashboard through the fast windshield, despite the size of the grandsphere and the roominess inside, this is actually a 2+2 seater, the rear offers a two-person bench with an armrest that goes around the side, integrated as a seating option in the back when the two front seats are in their most backward position.

With the seats in their upright position, the Audi grandsphere can be perfectly ergonomically controlled when outside level 4 zones as the car has to be driven using the pedals and steering wheel, however, when in ‘auto drive’, the back can be tilted 40 degrees and passengers can relax or use the infotainment system. ultimately, with the back folded down to 60 degrees, the result is a perfect resting position. The headrest can be moved 15 degrees forward while vents emit filtered and temperature-controlled (even scented if desired) air, and then there are speakers that are inaudible to other passengers and allow for a private aural zone while being transported in the Audi grandsphere concept’s first-class cabin. There is leather inside the Audi grandsphere, instead, you’ll find wool or synthetic textile material combined with wood and metal to offer the most pleasant touch, either sourced from sustainable cultivation or made from recycled material, and while every car needs displays, in case of this grandsphere these are actually projected onto the wooden surface, and while the car is in the automated driving mode, the entire dashboard fascia becomes a CinemaScope screen for entertainment or video conferencing. 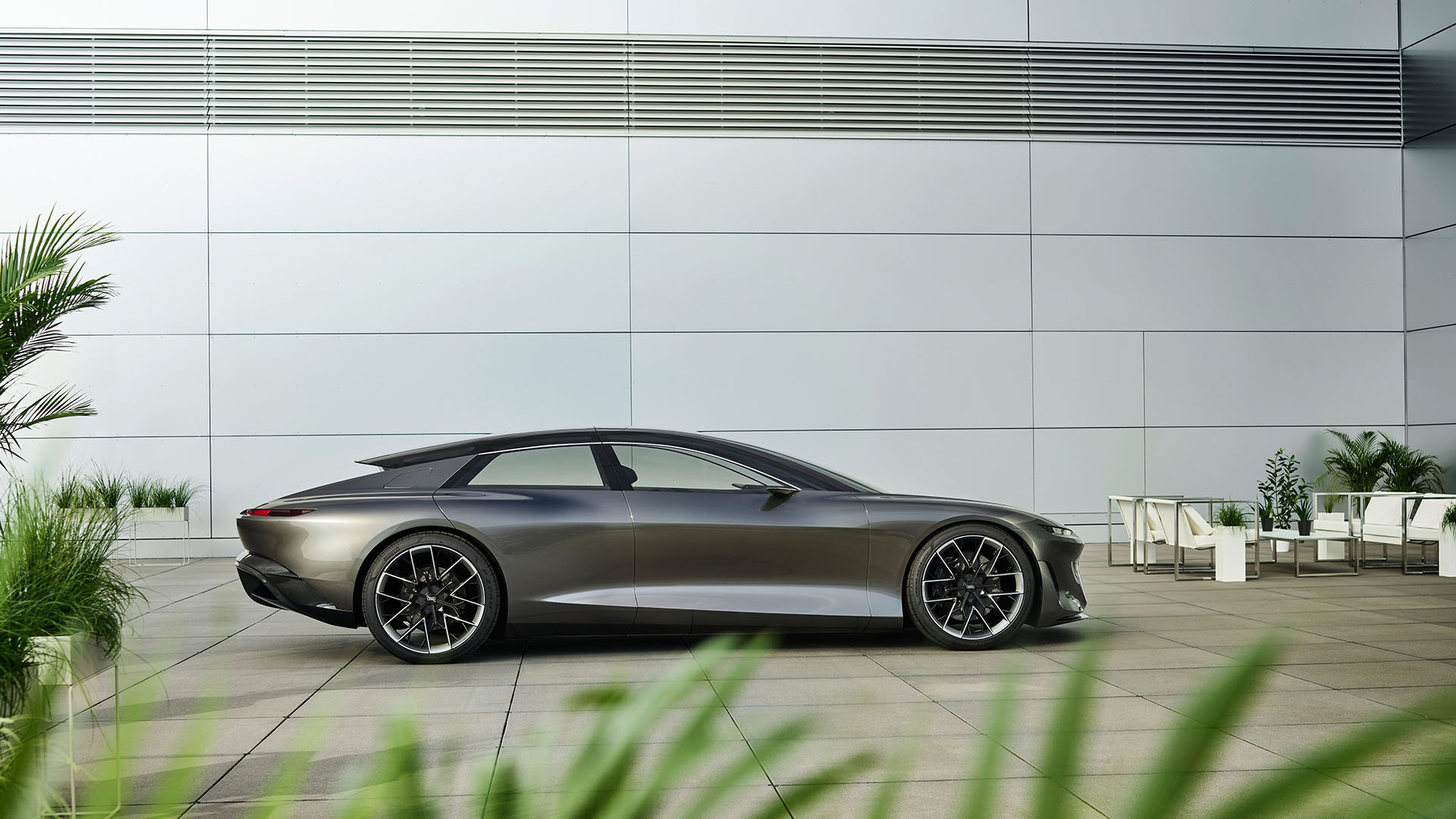 The Audi grandsphere comes with the innovative MMI touchless response, using haptic controls and even eye movement detection to interact with the driver, this concept comes with eye-tracking, gesture or voice control, and it comes with a level of AI as the system will ‘learn’ the preferences of the driver and frequently used menus … in the end, the system will be able to offer personalized proposals to the occupant, and if you really want to ‘tune out’, there are VR glasses in the armrests. Being a concept for the future, the Audi grandsphere is an all-electric car and should come with a 120 kWh battery module using the entire vehicle base between the axles, the massive 23-inch wheels are mounted on axles that have their own electric motor, one for the front axle, one for the rear axle, so this Audi has the famous quattro drive system … power output is an impressive 530 kW with 960 Nm of torque. Similar to the Audi e-tron GT, the grandsphere comes with an 800-volt charging capacity, this means a depleted battery can be charged up to 270 kW almost instantly when connected to a fast-charging station, it takes only 10 minutes to add 300 km (186 miles) to the range, going from a 5% load to an 80% load on the 120 kWh battery takes less than 25 minutes, the grandsphere comes with a range up to 750 km (466 miles), and while maximum speed is limited to offer more range, acceleration from 0 to 100 km/h (62 mph) takes little over 4 seconds. I have to admit, if this is the future we are heading into with electric cars, I’m not too worried, this car looks good, a sleek 4-door GT sedan, I wouldn’t call it a supercar or hypercar like the Koenigsegg Gemera, but this Audi grandsphere is intended for a different kind of customer … the future is electric, and the Audi grandsphere is a glimpse of what’s to come in the next decade or so. 50 Best Engines of All Time