Two months ago, Aston Martin launched its new AMR line of vehicles with a pair of limited-edition cars. One was a slightly warmed-up Rapide sedan called the Rapide AMR, and the other was a track-only Vantage with a race-car-derived V8 called the Vantage AMR Pro. Now the company has released a third, or third and fourth depending on how you’re counting, model that splits the difference. The new Vantage AMR, sans the Pro part, is available with either a V8 or a V12, and can be had as either a coupe or convertible.

What make the Vantage AMR special are limited production and aesthetic upgrades. Only 300 examples will be made, 200 of which will have the V8, while the other 100 have the V12. The V8 doesn’t make any more power than the standard model, but the V12 produces an extra 30 horsepower over the standard model for a total of 595. Aston Martin also offers an optional titanium exhaust to improve the sound of these engines and reduce weight, but it doesn’t change output.

Observers of these Astons will be able to spot them by their special paint schemes with a center stripe down the middle. The cars can be had in white with an orange stripe, black with a blue stripe, blue with a red stripe, or silver with a gray stripe. There’s also a “Halo Pack” that includes a green paint scheme similar to Aston Martin’s GT racing cars, complete with a lime green stripe. There’s also a no-cost option to add an Aston Martin badge painted in the colors of the Union Jack. Every color combination comes with a color-coordinated interior, too. 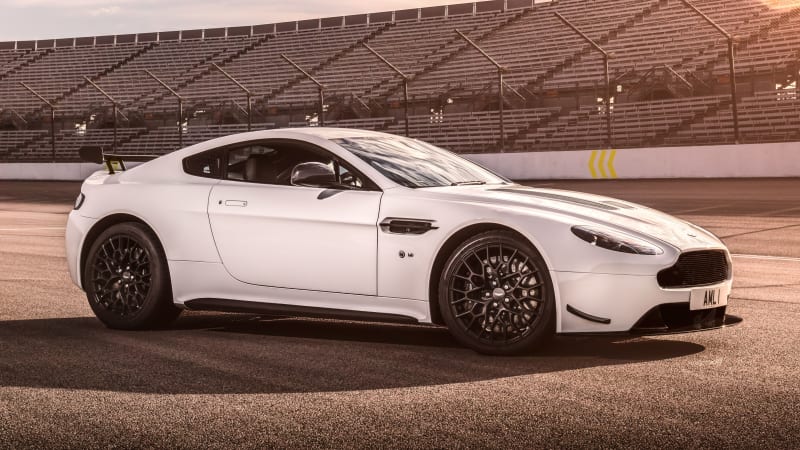 Just because this is a very rare Aston Martin doesn’t mean there aren’t any options. On the contrary, there are quite a few, mostly concerning appearances. On the outside, carbon fiber side skirts, headlight housings, and grille are all available. An aerodynamics kit is also available that adds a big rear wing, front splitter, and front canards for additional downforce. Lightweight forged wheels are also available. Inside, the carbon fiber decoration continues with available seats, instrument surround, window sills, and grab handles.

Depending on whether you’re converting Euros or British pounds, an Aston Martin Vantage AMR will start between about $125,000 or $143,000. That doesn’t really matter, though, since the Vantage AMR won’t be offered in the US. It will only be available in the UK, Europe, China, and the Asia Pacific region. Middle Eastern buyers can also pick one up, but only the V12 variant.