If I see a white Ferrari Testarossa, one TV show comes to mind, the hit series Miami Vice where after his black Ferrari Daytona (a replica based on a Corvette by the way) was blown up and Crocket received a confiscated black Ferrari Testarossa as a replacement, because the black car might have been recognized by thugs, the Miami Police Department decided to repaint the car to white on a tan leather interior, making this specific combination very popular next to the classic Ferrari red.

So when I spotted this BringATrailer auction for a 1987 Ferrari Testarossa, I immediately went back decades and remembered watching Miami Vice on the television one day a week, before I actually bought the entire DVD box with all seasons combined … yep, DVD was the best of the best at that time, I even had a VHS player at one point and several Lamborghini Countach posters on my bedroom walls, the counterpart for the Ferrari Testarossa that was built between 1984 and 1991.

One of the typical features on the white Ferrari Testarossa used for the Miami Vice show was the ‘flying mirror’, the single exterior rearview mirror that was mounted high up on the windshield sill, and only on the driver side … this mirror design was only used on very early production models of the Testarossa, in 1986 Ferrari switched to a more normal position and added a passenger-side mirror too, the car on auction right now is a 1987 model, so she comes with the two mirror setup, but she does have the tan interior too.

Remember we are looking at a car that is 34 years old now, chassis ZFFSG17A8H0072019 now shows about 47,000 miles on the counter and comes with a clean California title, styled by Pininfarina’s Leonardo Fioravanti, the Ferrari Testarossa comes with the massive side intake with ‘streaks’ that made this car instantly recognizable, and as we are looking at a supercar from the Eighties, we still get popup headlights with four lamps in total.

Naturally, we are looking at a five-speed manual gearbox delivering power to the center-lock Cromodora wheels in a mere 16-inch tall version, covered with Dunlop SP Sport tires at 225/50 and 255/50 to the front and rear respectively, a power which comes from the famous 4.9-Liter flat-12 engine with Bosch KE-Jetronic fuel injection, good for 380 hp to the rear wheels only, note that Ferrari already had a four-valve per cylinder setup on the Testarossa from the start, Lamborghini answered with the Countach Quattrovalvole in 1985, now with 455 hp. On the inside of this Bianco Ferrari Testarossa, we find a natural tan leather interior, the seat bolsters have been redone so they look amazing again, this car comes with power windows, air conditioning, and that stunning gated shifter with the satisfying ‘clunk’ when changing gears while you admire the Veglia Borletti tachometer with her redline at 6,800 rpm, the speedometer inside this Testarossa goes all the way up to 200 mph. 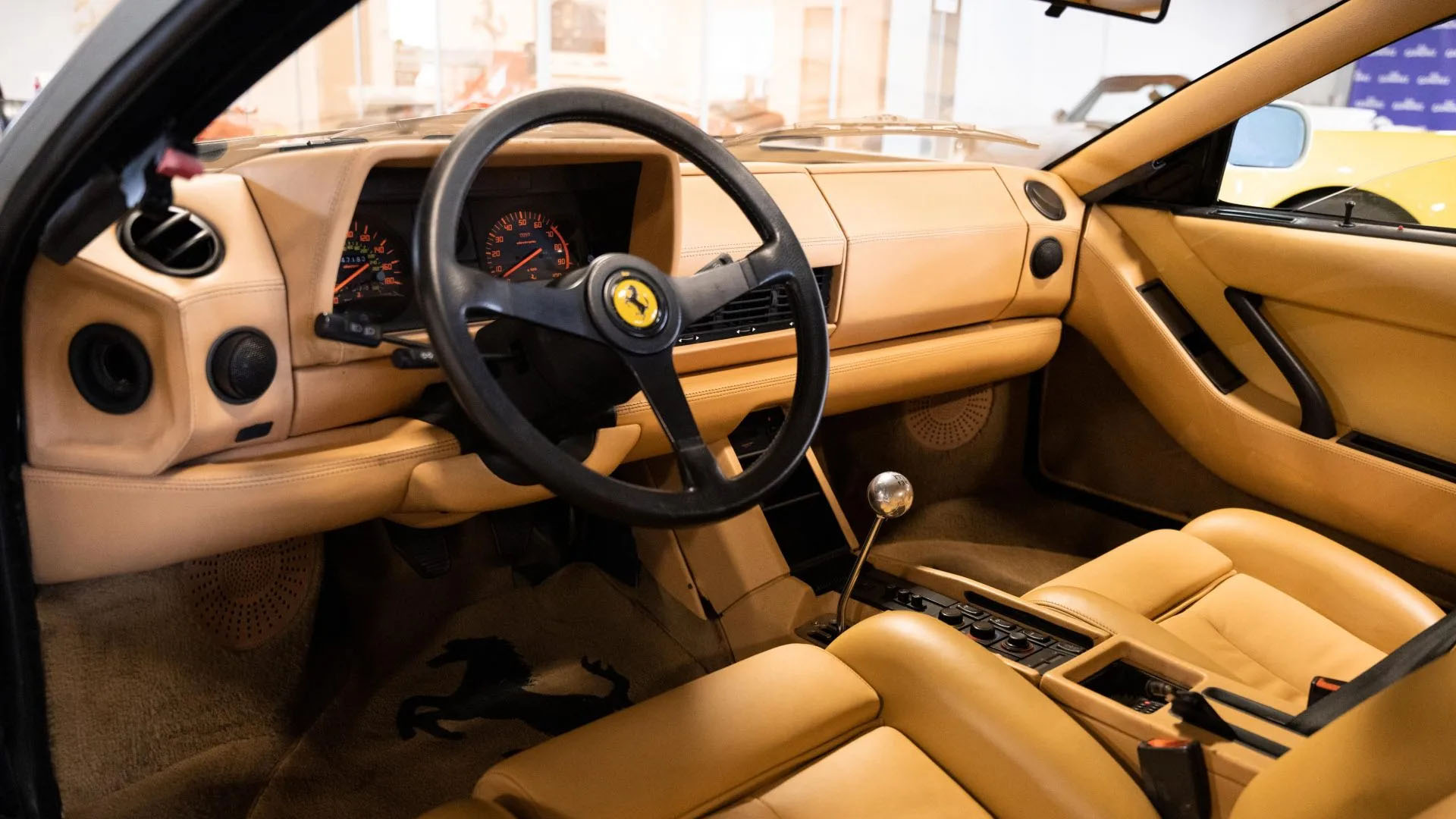 When you open the front hood on the Testarossa you actually gain access to a rather large luggage compartment, trimmed in tan carpet, it can hold quite some material, with the engine behind the occupants, the front made for a nice space to fit bags or other paraphernalia, in style naturally. This car is now listed at auction by a dealer who bought the car in 2020, the main service has been performed in 2018 by the previous owner that had the car located in California and Georgia before selling it to New Jersey, the Ferrari Testarossa is a classic supercar from a bygone era, together with the Lamborghini Countach and the G-Series Porsche Turbo, these three cars left a mark in the life of an entire generation, and those side streaks became a trademark for Ferrari at that time, using them on the 348 models too. At the time of writing the bids went up to $95,000 at the BringATrailer auction, which does sound like an interesting deal on such an iconic car, if you are interested in adding this classic to your collection, you should head over to the listing now, as it will end in a matter of hours … good luck.