You know the problem with a Bugatti Chiron? It can’t drive on water. Those poor ultra-wealthy Chiron owners will have to resort to some other brand for aquatic travel, and that just won’t do. Bugatti recognized this issue and built a Chiron-inspired yacht with the help of boatbuilder Palmer Johnson.

The companies actually started work on a yacht back in 2015, but according to Palmer Johnson, the design was different at that stage, and later it was redesigned to look like the Chiron. And it most certainly looks like a boat version of the hypercar. The horseshoe design on the sides of both are clearly connected, and the yacht is available in two-tone color schemes like the car. There are even options to have portions of the carbon fiber hull left exposed to show the weave. You can check out the different schemes using the online configurator.

The yacht features both an open deck and interior cabins. Outside there is plenty of leather and carbon fiber, and the decking is available in various types of wood, including a naturally blue morta oak. The hot tub onboard also features a champagne bar, and nearby is a fire pit. Inside, marble joins the carbon fiber and leather, and the seating area has a surreal, flowing, organic look that wouldn’t seem out of place in an alien spaceship. The theme continues to the bedroom, which features a double bed. 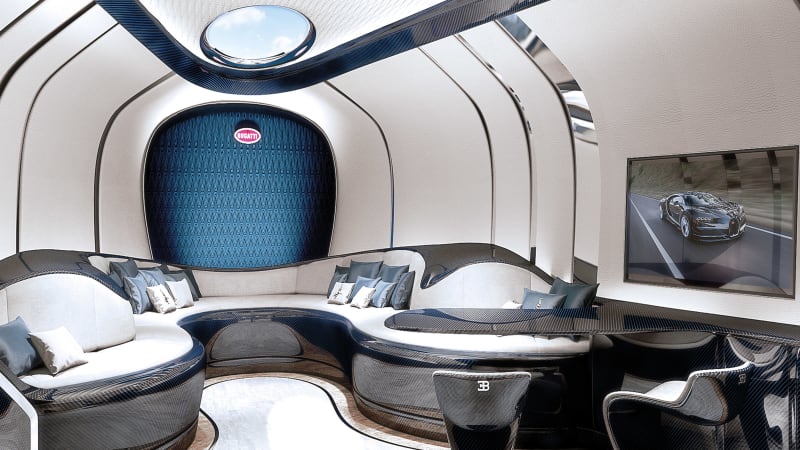 The roughly 66-foot-long yacht also features a Man V8 engine displacing 16.2 liters and making 1,000 horsepower, good for a top speed of 44 knots or just over 50 mph. A 1,200-horsepower version of the engine is also available, propelling the yacht to 48 knots, or about 55 mph. The use of Man engines is also a nice touch considering that Man and Bugatti are owned by Volkswagen. The name of the yacht also has an interesting connection to Bugatti. According to Palmer Johnson, Bugatti built a speedboat in 1930, and it was also named Niniette, the nickname for Ettore Bugatti’s youngest daughter.

If you want one of these yachts, you’ll want to act quickly though, as only 66 of them will be made. And price is only given on request. And you know what they say about having to ask for the price. If you miss out on the Niniette, there are other automotive-themed boats out there, such as a Lexus yacht or AMG speedboat.